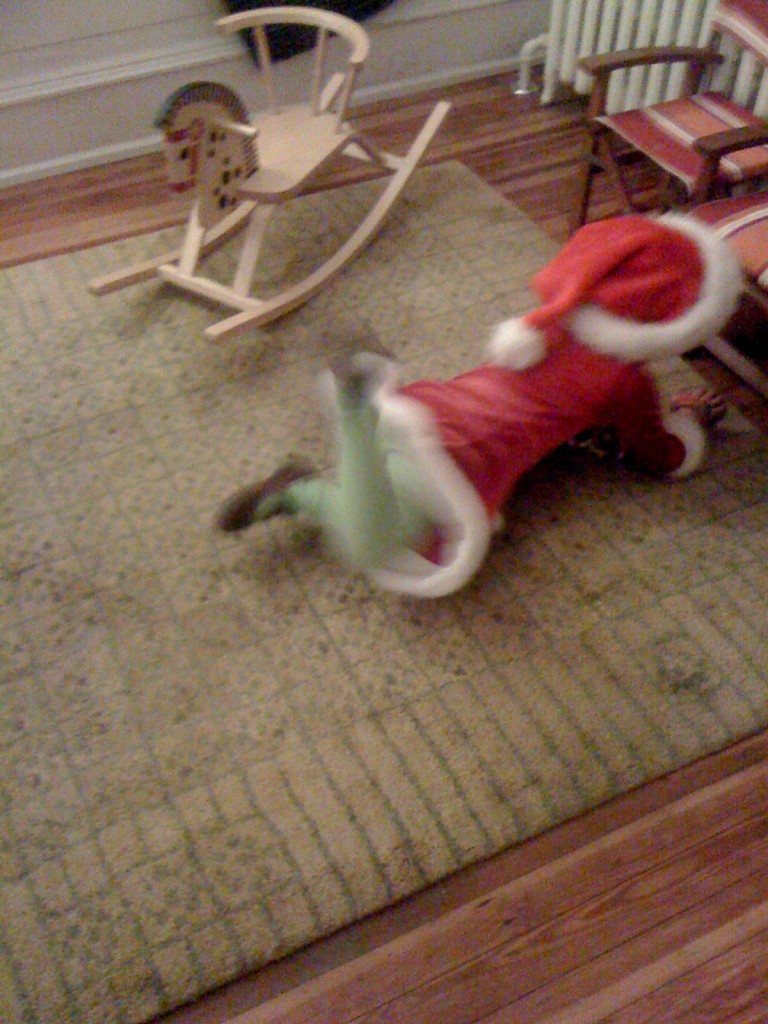 And to all, a goodnight.

High above the ocean, Jingles poked his head out of the toy sack and breathed in the cold Christmas Eve air. There was a taste of snow to it, which is dessert to a North Pole elf. There had been a full moon two nights earlier and the moon was big and white in the sky above, slightly worn along one side.

Santa turned and smiled, a touch of twinkle in his voice. “It’s beautiful, isn’t it?” he said. “It’s so pretty, it makes you want to do good, doesn’t it?” He took a deep breath of the night air and let it out again with a sound that turned into a laugh. The reindeer kicked up their heels when they heard him, and Rudolph turned his head for just a second to wink at them. From the ground below his red nose looked like a shooting star moving fast below the soft clouds.

When the last toy was delivered, when the morning sun was a red line chasing them around the Earth, Santa said they had one final thing to do. He said this without laughing, he spoke of it softly, he smiled as tired as any man who had been up all night in all parts of the world.

They flew to homes he’d saved for last: They visited families that had no home but a cold tent in Kurdistan, and he left some firewood for breakfast. He checked on the old single kerosene heater keeping a family of nine warm in Flint, Michigan. Small, poor homes, and Santa pulled out the bags of cookies he’d been collecting all night and left them arranged on little plates. They visited some old people everyone else had forgotten at Christmas. He left them cookies and fresh milk and tucked them in the way their mothers had when they were very young, the way no one had in a very long time. They found children in hospitals and he made sure they would have visitors in the morning and nice things to see and hear, even if their stomachs would be too upset to eat. Some who couldn’t see and some who couldn’t breath and some who would not run through fields again.

When all that could be done was done, when the reindeer had floated through every color of the sky, they flew home and slid under the white ice like a tune moving through a flute. Jingles sat next to Santa, holding the empty sack, watching the world turn back into the familiar homes and faces he’d left as the sun went down. Now the sun was coming up and he could smell pancakes and apple cider and honey butter and strawberry jam. A team of laundry elves took the toy sack from him as soon as the sleigh came to a dead stop. He could feel it slide out of his tired arms, glad for the help but a little sorry to see it go. They very solemnly folded it up and a team of four elves walked it over to the dry cleaners.

Santa Claus hopped down from the sleigh and stretched his back with a Ho Ho Ho and a big yawn.

“And now it’s officially Christmas,” he announced. “Merry Christmas, everyone!”

Jingles nodded and curled up asleep right there on the sleigh seat.

His mother and father picked him up very gently and very quietly carried him off to bed.

They would wake him up in time to open his presents.

from "Jingles Takes a Ride"
by Walt Maguire

"Would I have seen any of the fires you’ve put out anywhere?" @_juliaedelman and @ginnyhogan_ for the @NewYorker. #writerslife #writingadvice #writingcommmunity https://buff.ly/35jAy3Y

They're living in a world they never made. We all are. Stop whining.