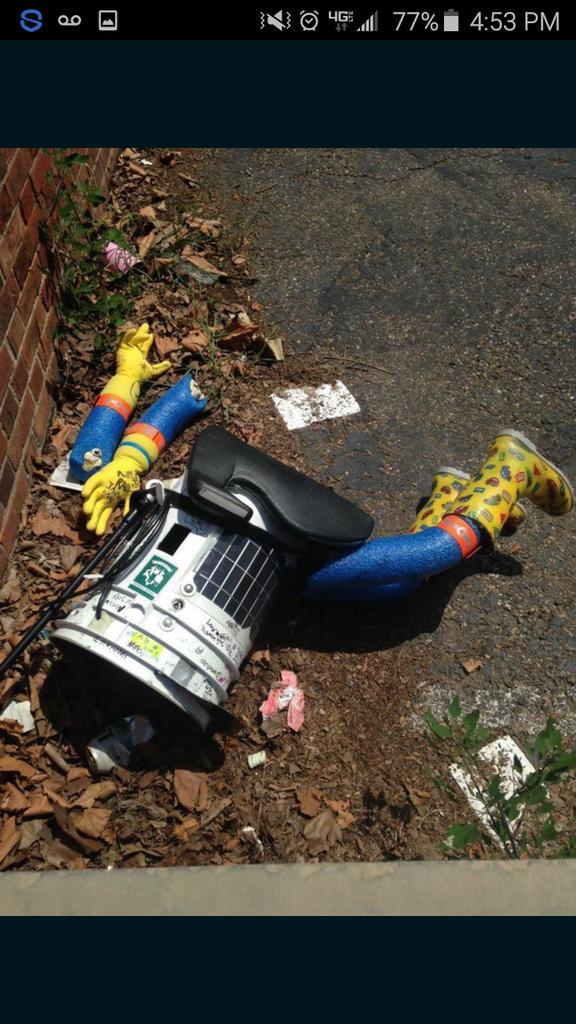 By now we've all heard the story of the hitchhiking robot that made it all around the world safely and the was ripped apart by colonial ghosts in Elfreth's Alley, a 17th century neighborhood in Philadelphia. In fact, since we all know the story, let's not speak of it. Let's all agree there are terrible people who see innocent young friendly robots in a dark alley at three in the morning and something about the way the light hits them, or a tone in the speakerbox, maybe the round glowing shape of its dispenser-like head, and some drunk idiot gets the idea it's full of candy and rips it open like a piñata. Let's not talk about it. I wasn't there, I don't know what happened. My wife will testify I was home in bed between 2:58 and 3:02 am on the night in question. My understanding is that this is precisely when it happened, at least a 45-minute drive from our house. I cannot imagine who would do such a thing. It obviously was not full of candy; looking at it in the cold light of day (which is the only way I have ever seen it) there is no way this could be a Hershey bar receptacle.  There is no refrigeration in its little plastic kitty litter bucket body.

I have no idea what that stain is on my shirt. I was cleaning the attic earlier.

...if you plan to be one of those Mars One colonists. For humanity at large, it's approximately the third frontier, depending on whether you start counting with John Glenn's sub-orbital flight. Or the fourth frontier, if you start with those Russian dogs and monkeys.

Who would want to do this? This woman seems perfectly sane.

On the other hand, a British paper reported the rumor that some of the colonists plan to grow weed and bogart the whole planet. That actually would make a great movie.

What happens, however, when faster ships are developed in ten or twenty years? Or are they counting on that?