A Planet Ruled by Apes?

It might not seem like it, but everything we've ever seen in the movies is coming true. Killer robots. Global climate upheaval. New Star Wars. And soon, talking apes. 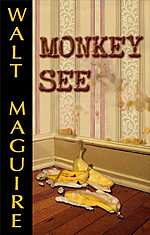 What, exactly, will they want to talk about?

"Monkey See" tells the tales they tell, shows the sights they see, hears the howls they howl, smells smelts they have dared to dealt. And so on. In clear violation of the Human-Animal Hybrid Prohibition Act of 2109.

They're living in a world they never made.

(In movies but not coming true: (1) Zombies and (2) Nerdy teenage boys getting the hot girl.)

Hear "The Job Interview," a chapter read by the author. See a few chapters at Scribd.

"I’m not exaggerating when I say that Walt Maguire’s Monkey See is the reason why small presses were invented."
- Small Press Reviews

Marc Schuster gave me a good review, and I'd like to mention that this wise, insightful writer's book The Singular Exploits of Wonder Mom and Party Girl was reissued by Permanent Press. Word is there's another one on the way. Oh, and it's funny. Almost as funny as mine. Almost.

Kind words from Michael Swanwick. Entertaining writer, generous blogger, and not above reminding me of a practical joke he played on me before cell phones were invented.
It involved some Bell Company equipment and a lot of tape.

Philadelphia Stories talked to me awhile back. And I talked to them.

"Would I have seen any of the fires you’ve put out anywhere?" @_juliaedelman and @ginnyhogan_ for the @NewYorker. #writerslife #writingadvice #writingcommmunity https://buff.ly/35jAy3Y

They're living in a world they never made. We all are. Stop whining.