Is "Planet of the Apes" complete fiction? Yes, what did you think I would say? Because it's monkeys, not apes, that get the real attention. From the History is Fun blog, 2007:

Clarence Darrow put a talking monkey on the stand. That’s right. A little monkey was sworn in, sat down, and answered Darrow’s questions for a startling half hour.

The drama of the Scopes matter continued to fascinate and stir the wonder of this small hamlet as a thirty pound African green monkey was called to the stand to answer questions from the defense attorney, the esteemed Clarence Darrow.  A shocked crowd proceeded to hoot and holler until reprimanded by Judge John T. Raulston.  Much to the amazement of all, the monkey spoke fluently and eloquently when questioned by Darrow.  However, the greatest surprise of all came when the prosecution’s William Jennings Bryan rose to question the monkey.  Under the harsh pressure of Bryan’s inquisition, the monkey broke down and admitted his answers were coached by Darrow adding, “I don’t believe I am related to any stinkin’ [sic] humans.”  Judge Raulston dismissed the jury saying he, “needed to make sense of all this hurly burly.” The monkey was later seen at a local tavern.  By most eye witnesses accounts he was visibly intoxicated.

I never did hear how this turned out, but I'm pretty sure the mutant fish people are feeling a little lonely these days.  Since it was Louisiana, I was looking forward to my crawfish etouffe being served by an actual crawfish. 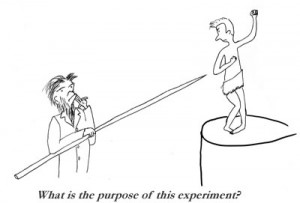 Reboot: The Bob Newhart Show, except with apt matching actual income of mental hlth professional and a schoolteacher.

alert! you should know there is a name for *** and it is literally DINKUS!